Sorry, I don't have a scanner, so I had to take a digital picture of this. Anyway, I work at a thrift store, and this photo was floating around in a bin full of books that I was stocking - presumably it had fallen out of one of the books. Written on the back of the photo was "Christmas 1990 - 'The Crew'". I was somewhat surprised at the year, because those are some pretty 80's hairstyles all around... But I guess it makes sense that some trends held over into the early portion of the next decade. 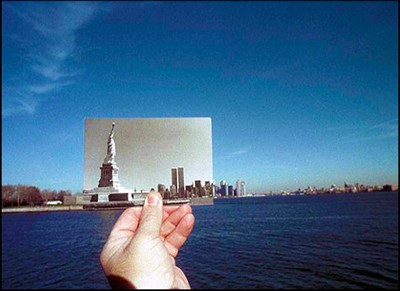 Edit: (May 2012)
I submitted this post on October 31st, 2011 but I guess it didn't get approved until a whole lot later. Because of the delay, most of my photos aren't going to show up. I couldn't afford to renew my website this year. Here is a link to my photobucket album which has a lot of these pictures: http://smg.photobucket.com/albums/v39/bentmywookie/Lucilles%20Suitcase/

Original Post:
Since it's Halloween, I've finally decided to share several of my antique photos with you. I know that a lot of people think that antique photos are creepy, but I think they're just poignant and tend to have more personality. This post mainly mainly contains photos that were taken around the late 19th / early 20th century, though I can't put exact dates on any of them.

One neat thing about this particular type of photograph is that it can leave its imprint upon the backs of other photographs if they're left together long enough. I call these "ghost photos." If you look closely, you can see that there's actually traces of two different photos: a child with a tricycle, and then a photo of a girl which is slanted towards the left. I'll explain more in a second.

Some of you will remember this vintage headshot I posted about here back in November. Well, through the power of the internet they mystery of it was solved when I was contacted by a good friend of hers last week. Details are posted here...

From Ebay... This is the best old man ever!

I found an actress's headshot in a suitcase full of vintage photos at a fair here in Atlanta. The back showed it was from 1963 and had her resume and other details.
Full scan of front and back and more details of my search for her here.

Found in family archives (i.e. on the grandparents' balcony in Kiev).
These are pictures of my mother as a young girl, ranging from 1972 to approximately 1975

In the zoo of Perleberg This man has the best hair.

Or, he did until someone took a bite out of it.


Found in the antique mall in which I work.

I found a big collection of family wedding photos in a box at my grandparent's house, and thought they were kind of cool, so I thought I would share. I appologize for the quality of some of the pictures, some were too big for the scanner and a couple of them were stuck in frames so they didn't scan very well.